I have a strange relationship with Dungeons & Dragons. While the old stereo-type is that the nerds playing D&D envied the jocks out partying and playing sports I was the exact opposite. While I loved playing baseball and have had some great times out partying, I’ve always preferred the nerd life. As soon as I got to college and realized baseball was becoming a full-time job and I was missing out on the things I truly loved — like movies, videos games, and all things nerd — I quit the team.

However, it was too late for me. All my life I had been in sports, so I had never developed a group of friends to get a weekly D&D game together. I would watch YouTube videos, play RPGs, and fantasize about making a trip to the local comic book stores to find a game, but never went through with it.

It wasn’t until my early twenties when a good friend finally invited me to a game, but when I arrived I was actually relegated to sit away from the table and watch him and his buddies play. Apparently, he hadn’t asked them if it was all right. My encroachment would have thrown off their existing campaign. My nerd heart was broken.

Finally, in my late twenties, my wife’s best friend’s husband invited me over for a game. I was finally going to get a taste of the most legendary pen and paper RPG in nerd history! I grabbed a 6 pack of good beer and spent an epic night rolling handfuls of dice, crawling imaginary dungeons, and just generally geeking out. It was awesome.

The only thing missing was the ability to create my own character. I was given a pre-generated character sheet and it was a great way to save time and learn the game. However, creating my own character has always one of my favorite parts of any RPG.

A year went by and I got the call again. This time, now that I had popped my cherry, I knew what to do — sorta. I used the online character generator at orcpub2.com and whipped up a guy of my own creation. Without further ado, Stanisthar “Hornyhead” Wolasad. 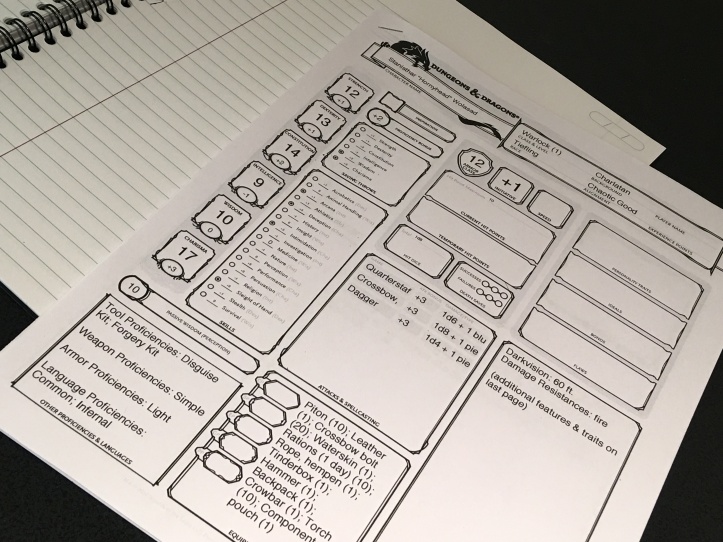 My strategy was simple; use the generator to make someone I thought was kind of badass, draw a cartoon version of him, then find a historical character on Wikipedia to model his back story after. For Stanisthar, I chose Al Capone. Basically, I copy pasted the first paragraph on his Wiki page, replaced “Scarface” with “Hornyhead,” made a few minor tweaks to keep it on theme, then added a sentence or two at the end to give it my own spin and voila!

Thought I would share a few photos from the adventures of Hornyhead!