Being alive, man. It’s a beautiful thing. Nothing is perfect and we get to struggle at times to make ourselves stronger. One aspect of life I enjoy and am lucky enough to be able to enjoy is baseball, especially the All-Star break. I enjoy numbers and stats so when I get the opportunity to be a nerd, compare things like this, and then boast my opinion on it, I become a happy little boy.

Little sentimentalism didn’t hurt anybody, right? except for those cold blooded people that live in my basement with one eye that I haven’t told anyone about.

Well, with one last day before the All-Star break, I would like to discuss some All-Star snubs that I thought deserved a spot on the roster. Since my blogger about the All-Star lineups the other day, Gleyber Torres, Masahiro Tanaka, Shane Bieber, and Max Muncy have all been added to their respectable teams. All have had fine years so far with Tanaka with the most questionable one in my opinion with even himself saying “I mean, just surprised because I never thought that I’d be selected” the other day when asked if he was “surprised” when he got the call for the All-Star spot due to a hurt Marcus Stroman. Thanks to northjersey.com for that info.

Let’s dive into it head first and hit our heads on the bottom of the pool. I will be discussing three men in depth with some honorable mentions. I do for the record feel like these guys deserved a nod but there can’t be teams of 50 on each team. That would be cool though and have it like the home run derby when all the little kids are running around with blind folds on dodging bullets falling from the sky with just a glove as their shield. Love it.

This guy is everything as advertised plus some. Unfortunately, the 20 year old superstar (yes he already is) missed about 20 games due to a thumb injury he sustained earlier in the season and so far has only played in 54 total games and that is the ONLY reason this man is not in his first All-Star game. Through 54 games, Tatis Jr. is hitting .324/.391/.593–.984 OPS, 66 hits, 44 runs, nine doubles, five triples, 12 home runs, 29 RBI, and 13 steals while playing decent defense. His ability to make to make plays at a premium position at shortstop is undeniable as his range factor per 9 innings sits at 3.92 and the league average sits at 3.88. The defense will come. Just like Mike Trout when he came in the league, he has/had everything when he was a rookie, but he knew he lacked arm strength so what did the man do? He went out all off-season and worked on it and got better.

Even with Tatis being on the IL for a few weeks, he deserved it on a Padres team who is still trying to find themselves. Did Tatis deserve it over Trevor Story? No. Did Tatis deserve it over Paul DeJong? Yes he did. Not taking away anything from the man as his season has been really good, but Tatis has been consistently great when he’s been on the field and proved he deserved to be there. The man might even do 30/30 and is projected to be right around there is he plays the rest of the season. There’s always next year and he’s got my nonexistent vote.

Another young buck that somehow got snubbed out of the All-Star game. Tommy La Stella deserved it by all means. Huge fan of guys that come out of obscurity and show the world they fucked up on skipping out on them. However, Devers is having an unbelievable consistent year and hasn’t slowed down since getting fucked out of the All-Star game. In 2019, Devers is hitting .328/.382/.554– .936 OPS with 112 hits (already four more than ALL of last year), 25 doubles, 16 bombs, 62 RBI, and a career high eight steals already. That is all through 341 at bats and not to mention he leads the American League in total bases with 189. After a bit of a down year last year in his first full season in the MLB, Devers came out this year with something to prove and to show the baseball world last year was a fluke. Devers has been the main catalyst for a Boston team with Mookie underperforming from his per usual out-of-this-world talent, Andrew Benintendi not hitting like he knows how, and Jackie Bradley Jr. still not dropping bombs, Devers has been picking up the slack.

The numbers speak for themselves. Does Devers deserve to be there over Matt Chapman? Maybe. If you ask a Bostonian they will say yes. Did he deserve it over La Stella and or Brandon Lowe before they both got hurt? Probably. Did he deserve it over a resurrected Hunter Pence? Probably. Or even over his own teammate Mookie? Yes. Sometimes life doesn’t work out for you and this is a clear example of Rafael Devers getting fucked. He has my imaginary vote next year. 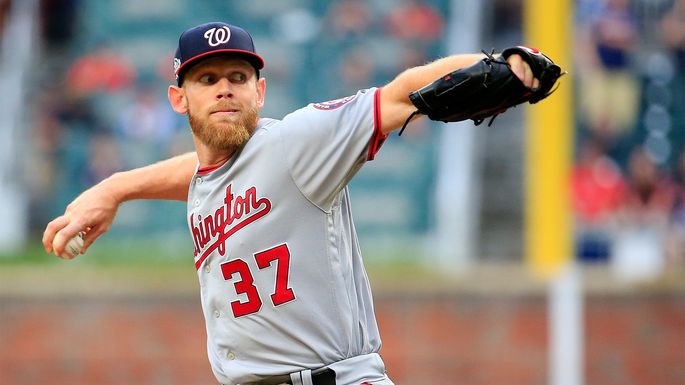 Strasburg is always a guy who is either going to be lights out and earn himself a spot or just hovering around waiting for his name to be called for the All-Star game. This year he got fucked. It hasn’t been the greatest of years for Strasburg but it hasn’t been bad by any means. So far, Strasburg is 10-4 with an ERA of 3.64, a WHIP of 1.04 with 138 strikeouts compared to only 29 walks through 116.1 innings. His last start against the Marlins (I know) was his best of the year where he allowed only two hits over 7.1 innings and struck out a season high 14 batters. Even though it was the lowly Marlins, it still shows his stuff hasn’t gone anywhere. His 10 wins on the year are tied for the National League lead with fellow National Leaguer Brandon Woodruff.

Speaking of, does Strasburg deserve the nod over Woodruff? I think so. Although Woodruff is having a great year and has 10 wins, Strasburg edges him out on ERA, WHIP, ERA+, and strikeouts. Woodruff does pitch for a slightly better team, but both pitchers have very comparable stats and either or deserves it with Woodruff besting Strasburg this year. Congratulations to Woodruff. Well deserved.

Baseball is a beautiful game. Kind of boring, but so unpredictable that it could be anyones year as long as the universe aligns for that single person. Congratulations to all of the 2019 MLB All-Stars and I hope I win all my bets in these next few days. Thank you to all have a great fucking Sunday.