MLB Network’s Shredder is a PHONY. Cliff Floyd is the Man Still 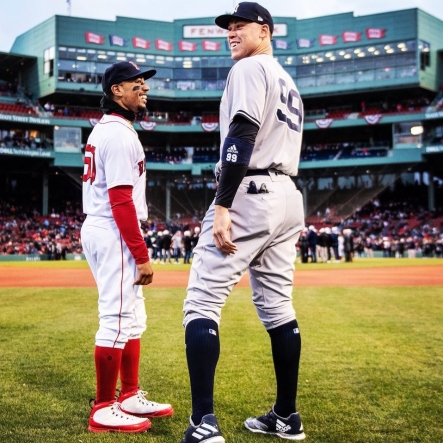 Any off-season for a sport is mostly pretty dry. The MLB off-season is no exception. Do Tennis or Golf have off-seasons? I’m not sure but I assume those might be a little more boring than baseball. Anyways, just like the other major sports, MLB has their own network called, you guessed it, MLB Network. I love this channel. I’m a baseball nerd so my T.V. back at home, when I had DirecTV (shout out dad), my T.V. stayed on MLB Network. I enjoy listening to former players knowledge of the game, their viewpoint, getting to listen to them in normal conversation opposed to as when they were a player that’s all I saw them as.

Every off-season MLB Network anchors and other people rank the players at each position for RIGHT NOW. As in the best player at their respected position based on their numbers from last season. I think it was two weeks ago, or last week, they did a piece on the top 10 right fielders in baseball right now. The host is Brian Kenny and joined him was my man Cornelius “Cliff” Floyd. Cliff to me is the common mans man. Good dude, good judge of character and great to listen too. So numbers 10-3 went like this:

Okay, so the list is pretty solid besides maybe switching Haniger and Harper but either way you look at it, it doesn’t matter because both are great with Harper going to be much better in the future. Little confusing is having the reigning National League MVP sitting at THIRD. Yelich, who obviously had an amazing year last year, led the league in batting average (.326) and OPS (1.000), OPS+ (OPS adjusted to the players ballpark he plays in), and total bases. Hit 36 home runs, stole 22 bases, drove in 110 runs, also scored 118 himself, and finished with an offensive WAR of 7.3. Not to mention helping the Brewers reach the postseason and win 9 of their last 10 regular season games. I know for a fact, that they looked at Yelich’s dWAR (defensive wins above replacement) and saw -.4 and said “fuck that throw him in third” which is fucked up. But that still leaves two spots left.

I’m sure if you’re a baseball fan, you could guess the only two missing; Aaron Judge and Mookie Betts. Mookie as we know won the American League MVP last season after putting up a great season that saw him slash .346/.438/.640, led the league in runs with 129, put up 180 hits, 47 doubles, 32 home runs, 80 RBI’s, 30 steals, while also earning a trip to the all-star game, Silver Slugger award, AND a gold glove. Who could top that?

I’ll tell you who MLB chose to top that instead of rightfully giving it to the candidate who earned it. Yes you heard right. MLB Network gave ANOTHER right fielder the top spot instead of Betts. I’ll give you a guess who it is: he plays for the only franchise that is put on a pedestal with everything in the sport of baseball. The fucking Yankees. And who plays right field for the Yankees? Fuckin Aaron Judge. Judge is a beast, not taking anything away from him. He’s a great guy and he’s done a lot for himself and the sport of baseball. But, he is NOT the number one right fielder heading into the 2019 season and MLB Network is on fucking meth giving it to him. This shit has been bothering me ever since this list came out. It means absolutely nothing to everyone else in the world and even the players because all it is, is a ranking. But, to me, it means that they are trying to brainwash the goddamn baseball world into making Aaron Judge the face of baseball. A non baseball fan just brushing across that list doesn’t know or understand baseball so now he will keep passing that phony bullshit across to his buddies while having a few beers and their buddies will tell someone else who doesn’t matter and so on and so on. It’s a fucking crock. Unreal.

Aaron Judge only played in 112 games last year. Judge broke his wrist in July and had to have surgery so he missed a lot of time. He still finished the year with 27 bombs and 67 RBI’s with a nice triple slash. This is why MLB Network gave Judge the nod over Betts:

Literally this list. They combined the last TWO seasons just to give judge the upper hand for some reason. Why? Because that’s the only goddamn thing they can think of. Also, they mentioned in the article, which is this link:– https://www.mlb.com/news/mlb-network-2019-best-players-at-each-position/c-264680678&#8211; That even though Betts “is a stud on defense” Judge had the third most defensive runs saved among right fielders the last TWO seasons. Hilarious how they want to so hard put a fucking Yankee in the spot light they can’t even play by their own rules. Want to know a little secret? Let’s look at the dWAR combined the last two seasons for Judge and Betts:

But yet they love that wRC+ stat with Judge leading by 19 points somehow. With the MLB world infatuated with the long ball, that is Judge. The thing is, Betts is right up their with him. Only with the ability to do it ALL. I’m not knocking Judge because he is definitely one of baseballs top five best players, but he is NOT the top right fielder in the game right now.

Mookie Betts deserves more respect. Thankfully, my boy Cliff Floyd let Brian Kenny know his thoughts as Floyd had the list CORRECT as he had Betts number one and Yelich number TWO with Judge coming in at three. The link I gave you a couple of paragraphs up has both of their individual completed lists if you’re interested. This is something that really does not matter because Betts and Yelich will go out and show the world why they are the top two right fielders in baseball and if it weren’t for that robot in the west coast Mike Trout, they might even be number one and two players in ALL of baseball. Just wanted to let you guys know that I love MLB Network, but when they fuck up, someone needs to call them out. Thank you.