The Tale of An Emotionally Invested Father

We all know the Cowboys lost by now. It was a tragic defeat but I’m going to stay on the optimistic side of things and say the Cowboys accomplished many great things this season after getting laughed at coming into the season. Our defense played better than anyone expected and we found a centerpiece to build around for the next 4-5 years in Vander Esch. Although the Boys did lose, there was one man in particular that did not approve of the Cowboys and this person is called “Dad” in their phone. After reading these texts you can kind of get a vibe from this man that he is not happy. Maybe a little mad, but mostly just disappointed. The disappointment this man is showing in the Cowboys is equivalent to finding out your son smokes pot all the time and now you know why he is such a bad kid. The kind of disappointment you almost do not come back from. Let’s dissect.

There are a series of four pictures in this demoralizing story of a Cowboy fan and his son trying to communicate during one of the most important games in recent years of being a Cowboy fan. Bare with this emotional roller coaster.

So as you can see with this first text, they are using an iPhone to converse. Right then and there you can tell this is going to be great because there will be no green bullshit in the texts. “Dad” is in the grey while, I’m assuming it’s his son, is in the blue.

“Dad” starts out pretty excited but a bit serious. So serious that it catches the son a little flat-footed so much so that he stumbles as he is getting prepared for this conversation. In just his second text of the night he is already implying that this is almost like a street fight. Do or die type shit. He types the words “but of course we need to punch them in the mouth on both sides of the ball.” You know he’s in-game mode with that comment. Caught off guard, the son replies “why are you being so serious” and the “dad” replies “Always” without missing a beat. So you know what type of “dad” this is. Then the son kind of pisses off the Dad by saying “What happened” and for a second, the Dad is confused. But still answers in a positive manner. In this first screen shot, everything seems to be good as the Cowboys scored. Let’s move on. Dad is up 1-0. 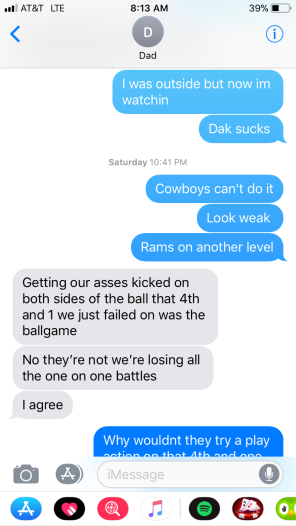 The son was outside. What he could be doing, God only knows. The Dad being so involved in the game, COMPLETELY ignores the fact the son could have been in danger outside. Kind of a dick move, but he gets over it quickly. The son seems to be losing faith, swiftly. Making comments on how fucking terrible Dak Prescott looked (duh) and going out on a limb saying the Boys’ can’t do it and look weak. Now the Dad gets involved as the son is showing signs of vulnerability. Showing signs of aggression, being pissed, and expressing his disappointment, the father seems fully engaged on the Boys’ not being able to convert a 4th and 1 that could have been the game as the Dad puts it. Now we’re talking war as the Dad mentions how stupid of a comment the son made by saying the Cowboys do NOT look weak and starts to mention his days of playing ball as the Cowboys were losing one on one battles. The battles that he never lost as a young and spry human he once was. Soon enough though, the Father recognizes his emotions were getting in the way of reality and agrees with his son, probably just to make him feel good and shut him up, with the simple comment of “I agree” on the Rams playing on another level. Score tied 1-1 between Father and Son.

Now you can tell the Dad is getting pissed by how long his texts are starting to get. The Son makes a great comment that goes completely unnoticed by the Dad because of how enraged he is at this point. Not sure how to react by the Son making sense, he starts to go off the rails mentioning the Cowboys shitty run defense and how they have been great all year in that department. Son goes for another try with making sense of reality but is soon shot down quicker than a one winged bird trying to escape the winter. Dad will NOT, I repeat will NOT admit the Rams are just that good. Even starting to call out the sport of football as a team sport and starting to call out players one by one. Evil. this man is, oure evil. But you cannot stop this man when he is passionate. The son does make a great comment at the end of the screen shot mentioning the name “Aqib Talib.” Dad is up 2-1. 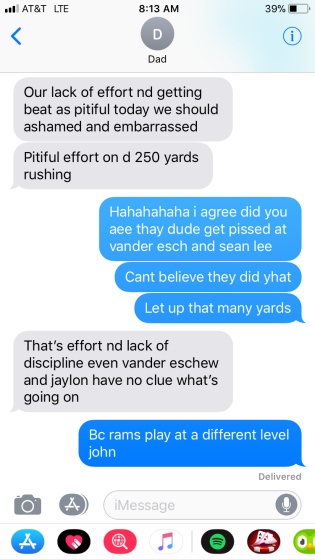 These are the texts that make me think he needs to be a coach again. Completely ignoring the name Aqib Talib, “Dad” goes into full-fledged coach mode and starts to drag emotions into this. Even goes as far as calling the players “lack of effort and getting beat pitiful” and they should be feeling the emotions of being “ashamed and embarrassed.” Although we can sense the train coming off the rails, the Dad still has his brain where it needs to be as there are no words spelled wrong except the last name of Vander Esch, which is a common mistake, where I just think he was mad texting and didn’t care. The son seems to think the Dad is funny as his serious demeanor seemed to be there the whole time and was finally let out here toward the end of the game. The son seems to still have his wits about him and maybe even be feeding off of the dads emotional state to  show his father who is the alpha. Yet the Dad is still winning the passionate battle. Then, towards the end of the conversation, “dad” starts to name drop by calling out the Cowboys better defensive players Vander Esch and Jaylon Smith. Even stating their lack of discipline now to add onto the already ashamed and pitiful defense that the Cowboys are. Bold, yet necessary for the one they call “Dad.”

In the end, this is a story of a Father who is not happy with the result of his team but yet still loves his son enough to kind of listen to him as he is texting him at this moment of despair. For now until this case get investigated again, we will let the emotionally invested father take the Dub on this one with a score of 3-1 against the lowly son. Congratulations Dad. I Love you.