Wild, Wild, West is Back

That is the Cowboys of course. The classic 8-8 team, the best franchise in football history, the Dallas Cowboys are on the path to the Super Bowl this year. With their game tonight, saturday, at 8:15, shit is about to get real. 2018 has been great to the Cowboys. Dak Prescott had dreams of his Rookie season back in 2016 when he was actually a good quarterback and made them a reality, Zeke speaks for himself (leading the NFL in rushing yards with 1434 with a shitty offensive line may I add), the reemergence of Amari Cooper after the Cowboys did something no other team would do, trade a first round pick for a guy who had 280 yards and one touchdown through six games as of when he was dealt. Star Center, Travis Fredrick, was diagnosed with a rare neurological disorder called Guillain-Barre syndrome which saw him sit out all of 2018 with no timetable set for his return. To say the least, the Cowboys only had a few, at the most, sure things coming into the 2018 season.

Somehow, along with their first round draft pick of Leighton Vander Esch making his own contribution, the Cowboys defense held their own plus some. Moving former 27th overall pick from the 2015 draft Byron jones to cornerback has paid dividends that the Cowboys CAN afford. The Cowboys picked up Jones’s option for $6.2 million after three mediocre, at best, seasons playing safety, the Cowboys decided to make a change. The Cowboys moved Jones to the outside playing the position he played for his first two years at UCONN and it has made him a Pro Bowler. Even without any interceptions, Jones still graded out by Pro Football Focus as the sixth overall corner back in the NFL. 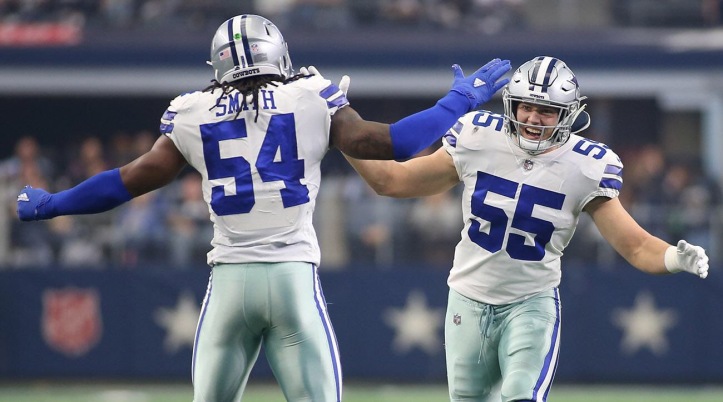 After a solid rookie season at linebacker, Jaylon Smith took over the middle linebacker duties this season and he has taken it in stride. Grading out as the number FIVE linebacker in the NFL according to Pro Football Focus, had two forced fumbles including a TD, all the while flying from sideline to sideline.

The former second round pick, Demarcus Lawrence, kept showing why he is worth the keep after a couple weird seasons to start out his career. Lawrence has now had two great back to back seasons and even collecting his first interception as Dallas’ starting defensive end. Lawrence graded out as the NFL’s number seven defensive end according to Pro Football Focus. Another name that has gotten lost the last couple years is a name by the name of Randy Gregory. Gregory, from the looks of it, seems to put his questionable past behind him. The Cowboys are notorious for signing great talents with off the field problems, like myself, just haven’t gotten signed yet, and Gregory is a guy that takes advantage of second opportunities. Playing a bit of a complimentary role to Demarcus Lawrence, Gregory registered six sacks in just 14 games and seems to hopefully put everything else behind him.

Of course, there are many more contributions, but the Cowboys as a whole did something the rest of the NFL didn’t think they could accomplish. After losing Travis Fredrick, and some other question marks on the O-Line, Zack Martin continued his dominance with earning first time All-Pro leading the pack for Zeke.

The whole world knew Tavon Austin’s signing was a bit over blown and Allen Hurns never panned out how us Cowboy fans hoped for, but Dak does not really enjoy throwing deep so it’s understandable. Anytime you go into the season with your number one reciever as Cole Beasley, not taking anything away from my man, but he is not the ideal reciever going up against the likes of Jalen Ramsey, Janoris Jenkins, and Josh Norman.

As we approach gametime tonight, be looking out for Jerry Jones to be drunk in the box, his son Stephen shining his shoes and Jason Garrett to look as handsome as ever taking orders from the man up top. Which is Jerry. Tonight is the road to the Super Bowl. Let’s fucking go Boys!!!!!