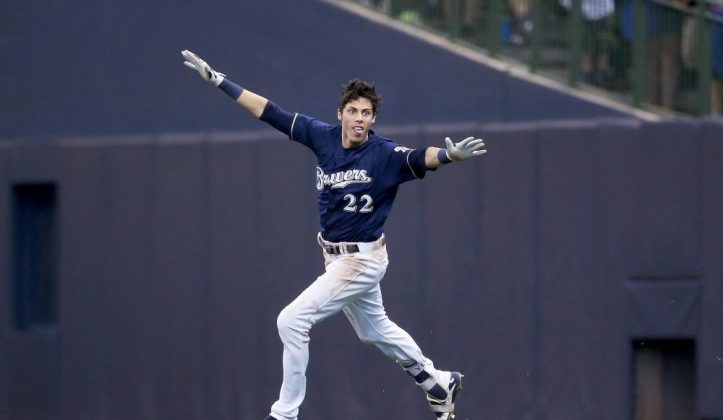 In not so shocking turn of events, the Dodgers and Brewers will be facing off in the 2018 NLCS. For the Dodgers, this will be their third straight appearance. For the Brewers this will be their first trip to the NLCS since 2011 when they lost to the St. Louis Cardinals who went on to beat the Rangers in 7 games of the 2011 World Series. This year is different. For one, the Cardinals are not in their way, and two, the Brewers are lock and loaded with a great lineup and pitching staff ready to show the world that their crazy, bold, season of building a championship team will pay off.

Both teams were Gruden Grinders this year doing all they can to make their lineup and benches deep as possible. I’m not going over both teams’ moves as I have done in previous blogs, but just know the Brewers added Christian Yellich, Jonathan Schoop (who’s been garbage), Lorenzo Cain, and reliever Joakim Soria. Christian Yellich has gone on to be the front runner of the NL MVP, Lorenzo Cain turned in a great season, Schoop, well didn’t do things he was supposed too, and Joakim Soria has been great when called upon. To say the least, the Brewers lineup is looking solid with the players I just mentioned, as well at Jesus Aguilar, Ryan Braun, Eric Thames and Travis Shaw.

With the Brewers relying on Jhoulys Chacin, Chase Anderson, and Junior Guerra as their top three starters, it could get ugly early but for the most part, Chacin has been great this year and should get the Brewers off to a great start. The bullpen is a different story. With Jeremy Jeffress having a career year this year, the Brewers have one of the best late inning relievers in baseball. Corey Knebel, although being removed from the closers role earlier this year, has pitched great of late and is a deadly combo with Josh Hader and Joakim Soria in the late innings. I have to give my guy Josh Hader some love as he has ran away with the Andrew Miller like role and might even be doing it better than the man himself. Hader is unbelievable.

The Dodgers added Manny Machado, Brian Dozier, and Matt Kemp and called up Walker Buehler to help their squad out in 2018, and everyone except Dozier has played a big role into their success. Machado didn’t miss a beat switching coasts and even got his old position back, shortstop, after the move. Kemp turned back the clock this season to look like his 2011 self when he was with the Dodgers and the team couldn’t be happier. Dozier on the other hand, has uh, not looked the greatest but still is a threat to turn it on. The Dodgers lineup is looking good going into the series, with the hot bat of Max Muncy, Chris Taylor, Manny Machado, Matt Kemp, Yasmani Grandal, and Cody Bellinger.

Led by Clayton Kershaw, the Dodgers rotation is a little more solid then their bullpen. Young super star Walker Buehler has solidified himself as a legit beast behind Kershaw and Hyun-Jin Ryu has thrown the almost better than anyone else in the big leagues since his return from the DL in early August. Kenley Jansen is still holding down 9th inning duties with Josh Fields pitching great as well in relief.

The Dodgers and Brewers have both been playing some of their best baseball since the month of September. With the Dodgers record of 22-10 and the Brewers record of 23-7, this series will be as good as advertised. During the season the teams were very evenly matched with the Dodgers edging out the Brewers with a 4-3 outcome. Stay tuned to the first game of the series starting on Friday, October 12th, both teams will be well rested and should be as good as series as advertised.