It is safe to say this show has picked up some steam and is heading in a fucking great direction.  The first two episodes had my attention but did not blow me away.  Then I thought about previous seasons, and usually that is the case for the most part.  Apocalypse is pulling out all of the stops now, as they are now introducing the story of the warlocks and how they are a rare kind of person, just like the witches from the Coven season of AHS.

Warlocks are described in this season as the opposite of the witch but with not as much control over their powers.  For centuries, the witch has reigned supreme over the male counterpart and as you may have guessed, the males do not take kindly to this.  Testosterone and toxic masculinity has held back the warlocks since the beginning of time and not until now did they have a reason to believe the hierarchy can change in their favor.

All because they discovered a young boy that has powers that they have never seen before.  This of course, being Michael fucking Langdon.  Episode 4 gives us the much needed backstory of where Michael has been since his birth in Season 1.  We are introduced the his relationship with Miriam Mead, played by the legendary Kathy Bates.  A devote satanist and devil worshiper, Miriam raises Michael with the same values that has led her to murder her previous three husbands.

Michael is discovered by the warlocks when he finds himself in Jail after he uses his powers to murder a man that insulted Miriam.  This is where the Warlock greets him and introduces him to a new vision and way of life.  They escape the jail and relocate to the underground warlock sanctuary.

This whole sequence was so cool to watch and come together.  I love backstories, especially if it is that of the antichrist…  The four most powerful warlocks put Michael through a series of tests, that he makes look extremely easy.  Three of the warlocks are ecstatic that this is their time to have a Supreme reign over all, as the fourth member recognizes that this is a demonic possession and something they need to stay away from.  Eventually they all come together and decide it is time to have a counsel meeting with the Witches and deliver the news that the hierarchy is swaying the opposite way for the first time in history.  There you have your setup for the apocalypse itself… 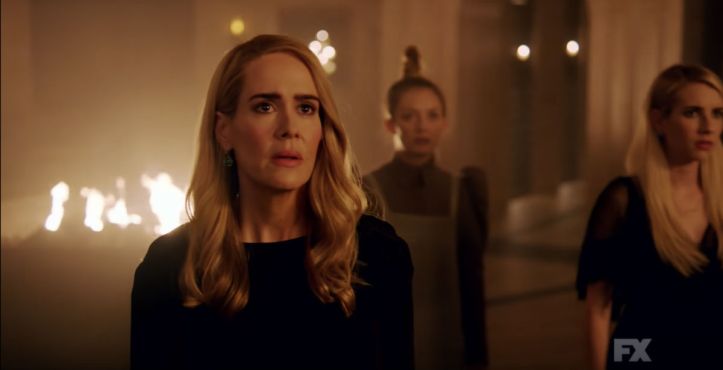 It was the men’s fault… Big surprise.

The season is now getting extremely story driven and fascinating.  Falchuck and Murphy have been waiting to tell this story and it is coming together beautifully.  The latter half of Apocalypse should prove to keep us on the edge of our seats and wanting more.