The National League is a bit closer in terms of competition. In the American League, you have the Red Sox running away with the Eastern division. In the Central, you have the Cleveland Indians bullying all the nerds in gym class. Then, in the West, you have actual competition between the Astros and A’s, even though the Astros will probably take that division. I said probably, so maybe not. As a baseball fan, these are the types of races you want to see with three weeks left to go in the regular season. Let’s take a look into what’s happening in the National League.

NL East- I’ve said it before and I’ll say it again. Before the season started, I chalked up this season as a lost season for the Atlanta Braves. Being a Braves fan, I was ready to give them a year or two to figure it out. This is one of those rare instances I couldn’t be happier to be wrong. The Braves are leading the NL East by five games with a record of 80-64. The Phillies, who were another team not expected to have a great year, have surprised everyone by sitting in second to the Braves with a record of 74-68. The team SUPPOSED to take the NL East title has faltered this year in a bad way. The Washington Nationals currently sit at 71-72 and had become sellers at the waiver deadline trading away Daniel Murphy, Matt Adams, AND Gio Gonzalez while also putting Bryce Harper on the block. The Mets can’t get their shit together and the Marlins were an obvious choice for last in the division. 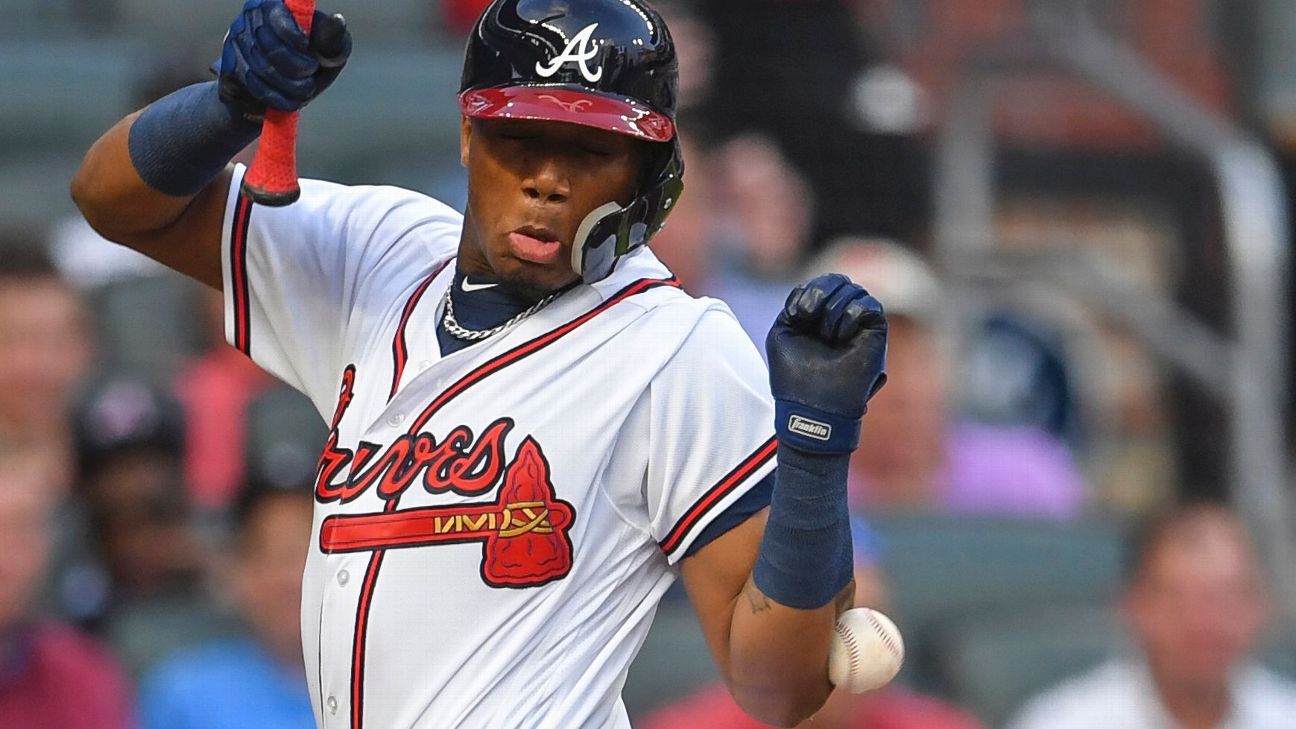 We had to patiently wait a few weeks for Ronald Acuna to make his debut, Ozzie Albies was entering his first full season in the majors, Dansby Swanson was coming off a horrible year, and the pitching had question marks all through out their rotation and bullpen. The world was proved wrong on all aspects. Acuna has done more than anyone expected. The man hasn’t even played 100 games this year yet (95) and has already accumulated 25 home runs, 53 RBI’s, 14 steals, 68 runs, .290 average, .368 OBP, and an OPS of .943. Since the All-Star break, Acuna leads the National League in home runs with 18. Since his move to the leadoff spot, Acuna has been unstoppable and has caught the world by surprise by how good he has been in such little time in his first big league season. To say he is living up to the hype is an understatement. And to think he could be better at only 20 years old in mind-blowing. Nick Markakis is having a career year at the age of 34 earning his first trip to the All-Star game by hitting .306/.371/.457 with 14 home runs, 88 RBI’s and leading the National League in doubles, 40 and hits with 174 so far.

Mike Foltynewicz has been the stalwart for the rotation the Braves were hoping they would get when they acquired him for Evan Gattis back in 2015. Pitching to the tune of a 2.66 ERA through 166 innings to go along with 186 strike outs while just completing his second complete game of the season on Tuesday against the Giants. Julio Teheran has seemed to hit his stride late in the year finally getting his ERA under 4 for the first time since mid June. The bullpen has been a little weird but for the most part has kept their shit together with Dan Winkler continuing his success from last season to produce an ERA of 3.07 and leading the Braves in appearances with 64. A.J. Minter has stepped up in a big way after closer Arodys Vizcaino went down with a shoulder injury in mid-late June. Minter has saved 14 games filling in as closer and seems comfortable in his new role. With three weeks left to go, hopefully the Braves can keep their shit together to hold off the Phillies to take the NL East title.

NL Central- After some POWER moves in the off-season that included the additions of Christian Yellich, who has hit his way into MVP consideration, and Lorenzo Cain who is quietly putting together a great campaign, you knew the Brewers were not fucking around this year. Then, the trade deadline came along and the baseball world REALLY started to understand how serious the Brewers were taking this year. At the deadline, the Brewers Acquired Mike Moustakas from the Royals and Jonathan Schoop from the Orioles. Although Schoop has not provided the boost many thought he would, he is still a threat day in and day out to get it going. Jesus Aguilar has taken full advantage of the opportunity given to him with the injuries of Eric Thames this season as he is leading the team in home runs with 31 and RBI’s with 97. The emergence of lefty Josh Hader has given Indians Andrew Miller a run for his money as best lefty reliever in baseball. Hader has been crazy good this season as he has been used in all different scenarios but overall has accumulated 74.2 innings that go along with a ridiculous 130 strike outs which average out to 15.7 strikeouts per 9 innings along with five wins 11 saves and 20 holds.

Even with the Brewers building the super team of baseball, it still hasn’t gotten them out of 2nd place in the division. the 2016 world champs Chicago Cubs lead the division by a slim margin of two games. It seems whoever does not win the division will almost surely get one of the two wild card spots. The Cubs have been led by MVP candidate Javier Baez who has put together a very impressive campaign so far. His slash line of .292/.326/.559- his slugging leads the league along with 30 home runs, 100 RBI’s and 21 steals, there isn’t much that Baez hasn’t done this year as his 5.3 WAR is fifth in all of the National League. Anthony Rizzo has played like his normal self with 24 bombs and 94 RBI’s so far, Ben Zobrist is leading the team with his .312 average, and Albert Almora has hit way better than expected and has played gold glove caliber defense in center field. The Cubs bullpen has been dominant with Steve Cishek has turned back the clock and is pitching to the tune of a 3.32 ERA through a team leading 71 games pitched so far. Jon Lester is leading the rotation with 15 wins and a 3.57 ERA through 163.2 innings. If the Cubs rotation can pitch like they were in 2016, we could be looking at another World Series appearance in October.

NL West- The NL West has been hands down the most exciting division in baseball this season. As of today, the Colorado Rockies lead the division by two games over the free spending Los Angeles Dodgers. After all the moves the Dodgers make, year after year, they still cannot find an easy way into the playoffs. Closer Kenley Jansen went down with heart problems that have plagued him during his career. Clayton Kershaw was hurt for most of the season along with blister man Rich Hill and Alex Wood has only thrown 148 innings so far. So, instead of helping improve their injury prone pitching rotation, the Dodgers went out and got top free agent Manny Machado who has played as expected. Matt Kemp and Max Muncy have been pleasant surprises that have held down the lineup with disappointing seasons from Chris Taylor and Yasiel Puig. The Dodgers are really going to have to figure out the bullpen situation these next two and a half weeks to have a chance of holding off the Rockies and Diamondbacks.

That brings us to the Colorado Rockies. Always known for their hitting, this year is no different. With Nolan Arenado playing like his usual MVP self, which includes 33 home runs and 99 RBI’s so far, while also playing his usual Gold Glove defense, he is the farthest thing from a surprise. Shortstop Trevor Story has proven last year was bullshit. Bursting onto the scene this year with a slash line of .291/.345/.554 to go along with 32 home runs, 100 RBI’s, 78 runs, a league leading 40 doubles, and a surprising 25 steals, Story is without a doubt an MVP candidate and is looking like he is here to stay. Not the mention Charlie Blackmon is still leading games off with Carlos Gonzalez in right, hitting a healthy .280 this year, former batting champ D.J. LeMahieu still doing his usual smacking hits all over the field and the list goes on and on with hitters.

However, hitting has never been the problem. Playing at those high altitudes in Colorado, pitching has always been the problem. This year is different. They have a legit number one in Kyle Freeland who has somehow, in 13 games IN Colorado, has pitched to an ERA of 2.21 with a record of 8-2. Think about this because I just looked at those numbers for the first time and I am kind of speechless. That has got to be some type of record ERA at Coors field because there is NO way anyone has come close to that. Anyways, while I tuck my woody into my waistband, Wade Davis has not pitched like his normal self this year with an ERA of 4.63 but has still saved 39 games. German Marquez has also held his own this year by leading the team with 195 strikeouts and a serviceable ERA of 3.94. Reliever Adam Ottovino has also been the reliever the Rockies have needed this year by easily being their best reliever pitching in 68 games with an ERA of 2.15 and striking out 104 batters through 71 innings. If the Rockies pitching can hold up these next two weeks, we could be looking at the Rockies first playoff berth since 2009.

The Diamondbacks. They went out and got 3rd baseman Eduardo Escobar from the Twins, Jake Diekman from the Rangers, traded for Steven Souza in the off-season and made a very underrated/lucky signing that has panned out really well in Clay Buchholz. After a slow start from Paul Goldschmidt, A.J Pollock getting hurt, it didn’t look good for the Diamondbacks. But, Goldy started to hit and the Diamondbacks have stayed in the race. Currently 3.5 games back in the division, and 4 games back in the Wild Card, these next 2.5 weeks of baseball are more meaningful than ever for the D-Backs.

Obviously, I had a lot to say about the National League because that to me, is the more exciting division races. And I’m, a Braves fan. But besides that, numbers don’t lie and the races are a lot closer and more competitive at the moment. Even though football is back, the ending to the 2018 baseball season should be exciting.