This is an overview, so it might be a little long, but it’ll be worth it.

With the first week of the NFL season in the books, we can all start to generate our focus back to baseball. This is the time of the year where, for some reason, baseball gets lost in the sports world. The only people who still pay attention to baseball during football season as the baseball nerds, like myself. I never give up on baseball. Even in the boring off-season when every player is focusing on “being in the best shape of their life” I still pay attention. With the baseball season winding down, there are a few big stories to pay attention to. Let’s take a look what is still yet to come in the final three weeks of the season.

AL East-I want to say I feel bad for Orioles fans, but i don’t. Every team has to go through the shit the Orioles are going through and now they are playing for that number one overall draft pick. It needs to happen. The saddest/funniest thing about the AL East and maybe baseball this year, is the Orioles are 56.5 games back from the Red Sox. Yes, you read that right. You really need to see that number written/typed to get an idea of how bad they have been. The Orioles were easily the first team to lose 100 games and the Red Sox seem to be on their way to becoming the first team to win 100 games.

All smiles in Boston though. The Red Sox season has been fantastic in so many ways. You have Mookie Betts and J.D. Martinez leading every hitting category for the team. Not to mention J.D. Martinez chasing the triple crown this year. Leading the American League in RBI’s with 121, second in home runs to Khris Davis, who is ahead of him by ONE whole home run, and also second place in average to none other than his own teammate, Mookie Betts who holds a .342 average compared to Martinez’s .331. Still very impressive. Can’t forget about Xander Bogaerts holding his own as well this year hitting .291 with 21 home runs and 93 RBI’s. The Red Sox lead the league in runs scored, hits, doubles, total bases, RBI’s, average, tied for first in OBP, slugging and OPS. Just to put it into perspective of how great they have been this season. Fucking crazy.

It hasn’t all been their hitting though, as we cannot forget about the shirt cutting Chris Sale dominating per usual even though he has missed a few starts, with only 149 innings pitched this year. David Price looking fully recovered from his injury riddled 2017 posting solid numbers this year with a 3.57 ERA with a 1.13 WHIP. Rick Porcello keeping the Red Sox in the game with his 16 wins (overrated stat) with a 4.27 ERA and 1.18 WHIP. And of course, we have the show stopper Craig Kimbrel holding down 9th inning duties and showing why he is one of baseball’s top closers year after year. Posting a 2.41 ERA to go along with 86 strike outs through 56 innings while accumulating 38 saves, which ranks him second behind Edwin Diaz’s eye-popping 54 this year. It would be a shame to see the Sox go down in the postseason after such a successful regular season.

AL Central Cleveland seems to be running away with the Central Division, up 15.5 games on the Minnesota Twins in arguably baseball’s least competitive division in 2018. It’s like playing a kid or kids in a sport which they have not played before. It’s unfair. Cleveland owns two MVP candidates in Francisco Lindor and Jose Ramirez who have been catalysts for the team this year. Ramirez becoming the first player to accomplish 30-30 since Mike Trout and Ryan Braun did it each in 2012. Just when you think Lindor has reached his ceiling, at the young age of 24, he one ups it year after year. Lindor has already set career highs this season in home runs with 34, stolen bases with 23, and runs with 118, still with three weeks left to go. Did you think I was going to leave Edwin Encarnacion and his chicken wing that he has let loose this year 29 times? Nope. Encarnacion has done his thing this year looking for his 6th total season with at least 30 home runs and 100 RBI’s, currently he sits at 29 and 94, respectively. Michael Brantley has been healthy all year looking to play the most games he’s played in a season since 2015 when he played in 137. With the addition of Josh Donaldson to that lineup, the Indians are boom or bust this postseason. 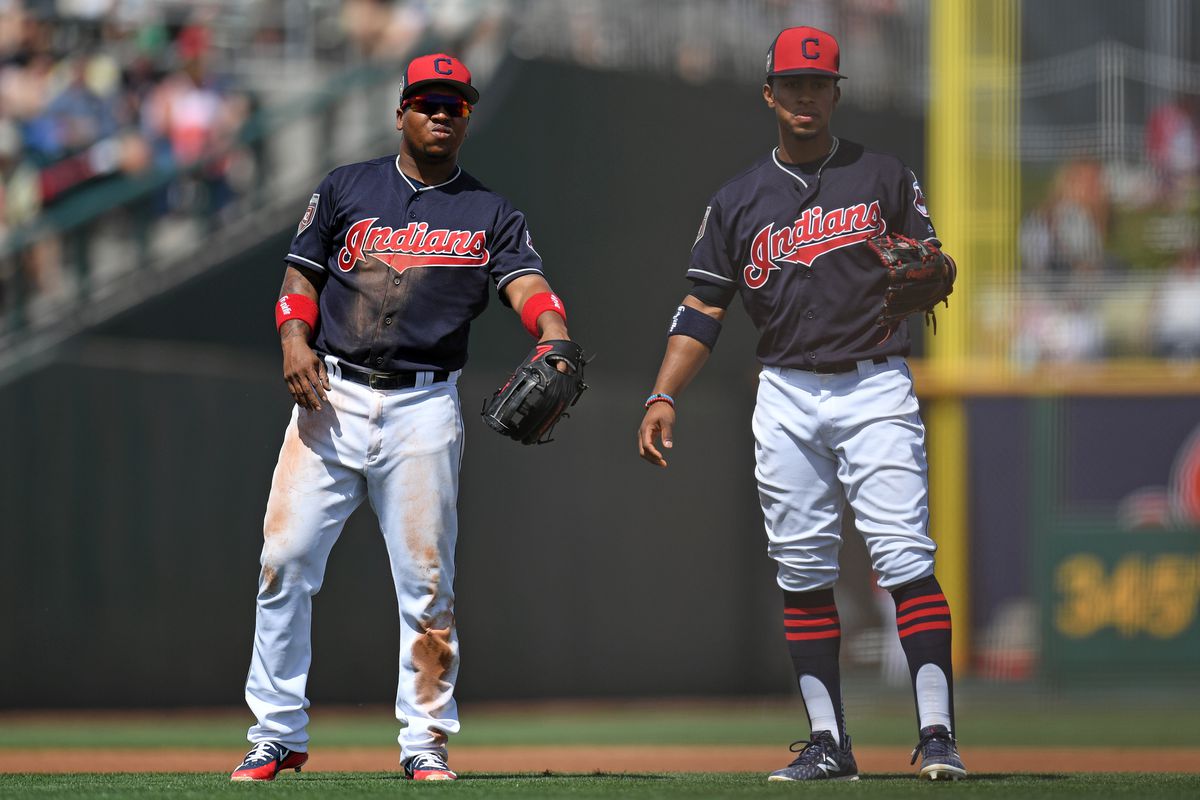 Cleveland also has some dude named Corey Kluber, AKA Klu-Bot, AKA fucking grinder. The dude year after year is among baseballs best starting pitchers and this year is no different. leading the team in wins with 18, he also has a, ERA of 2.91 with a microscopic WHIP of .97. If Trevor Bauer didn’t break his leg, he might be leading the Cy Young conversation as he had s 2.22 ERA with a 1.09 WHIP and 214 strike outs in only 166 innings pitched this year. Carlos Carrasco has also established himself into one of the best pitchers in the American League striking out over 200 batters this year already (201) with an ERA of 3.41 through only 169 innings this year. Cleveland also has Cody Allen in the back-end of the bullpen, along with Andrew Miller just returning from the DL and the addition of Brad Hand from the San Diego Padres. If Trevor Bauer can return to his regular season form, Kluber, Carrasco, and Bauer make a pretty intimidating 1,2,3 punch for the playoffs.

AL West- One of the better stories of the 2018 season is the Oakland A’s. Not only are they chasing the defending champs the Houston Astros, Yes, the Astros, not the Wild Card. But they are only three games back in the division. The Mariners were hanging in there for a while, but have tailed off a bit in the last few weeks. Back 7.5 games, along with baseballs hottest team the TAMPA BAY RAYS, neither team seems to have a shot at the post season this year despite great seasons from both. Anyways, I have written about the A’s great season and they seem to be showing the world that they are indeed legit. Sitting at 87-57, this will be the A’s best season since 2014 and a lot of people did not see it coming. The emergence of 3rd baseman Matt Chapman, who is 6th in all of baseball in WAR. Bomb dropper Khris Davis, who leads the league in home runs. Hitting machine Jed Lowrie, who seems to be well on his way to his best season to date, earning his first trip to the all-star game this year. Stephen Piscotty who has been consistent all year while setting a career high in home runs with 23 so far. The list goes on and on. 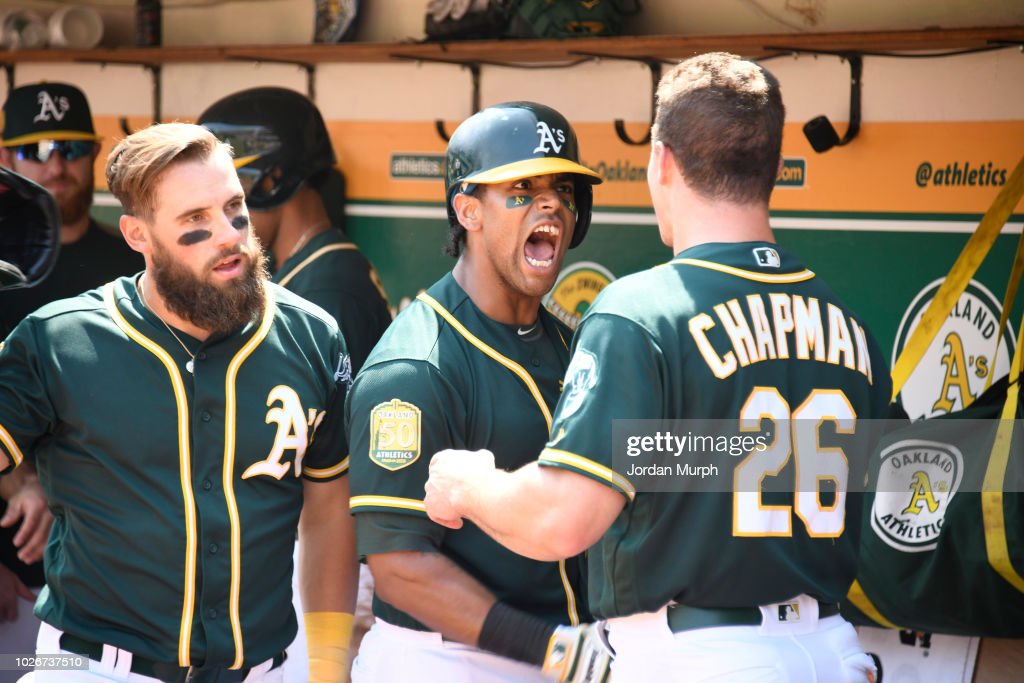 Sean Manaea, who was holding down the number one spot in the rotation before he got hurt, has gotten great back up through resurgent seasons from Trevor Cahill and Edwin Jackson who have both pitched to ERA’s under 4 and have looked like their old selves from previous successful years. But, I have to give credit to GM Billy Beane for putting together the bullpen he has. Closer Blake Treinen is having one of the best seasons for a closer ever. Along with his 37 saves which ranks 3rd in the league, he has complimented that with both his minuscule ERA and WHIP that both sit at .87. Veteran Fernando Rodney, Jeurys Familia, Shawn Kelley, and Mike Fiers were all added at the trade deadline and have made the A’s pitching staff one of the best in the league.

Yes the Houston Astros are still really good. No need to talk about them.

In a perfect world, I wish we all could watch the Tampa Bay Rays ball the fuck out in the playoffs with their weird ass pitching algorithms and underrated lineup, but not this year. Maybe soon, but not this year or next. For now, we will have to enjoy watching the Houston Astros have baseballs arguably baseballs most potent roster, the Boston Red Sox continue to dominate every team they play, the Yankees hit the shit out of the ball, the Indians beat up on the weakest kids in gym class, and the Oakland A’s continue to pull of a miraculous season. All are a good time except the Indians being bullies.

P.S. The Tampa Bay Rays baby. Sting em, Rays up, Rays up, sting em. Someone needs to jump in the damn Rays tank before they take it away.