You Can’t Tell Joey Votto to Pop Up

If you didn’t have proof of this stat you 100% would not think it is real. I’m not a big social media guy so one of my friends sent me a text asking me to look at it. Thanks to Jeremy Frank, of NGBaseball.com, he sent a shock through the world of baseball nerds with this stat.

Unfuckingreal. Dude is a MACHINE. We all knew the Canadian was a beast, especially by the way he carries himself on and off the baseball field, but this just solidifies it. If you cannot do simple math, which some of us struggle with, that is a total of SEVEN pop ups in 7.6 years. He also plays on a Major League Baseball team. Those are not little league stats, those are real life, real shit facts. I mean, imagine him in adult softball, The pitcher or infielders might die because the man does NOT hit fly balls!!! As you can see, 2015 was an off year by a lot of standards. Votto hit a total of 2 fly balls. Hitting .314 and leading the league in walks with 143 with an OBP of .459 it’s crazy he did not league the league in that category as well. He also hit 29 bombs driving in 80 runs and scoring 95 times while also adding an impressive 11 steals. But for some reason I can’t stop thinking about those two fly balls. Why did he hit them? Did he drink the night before? Did he put a half oz more of maple syrup on his flapjacks that morning? Were his legs giving out for those two dreadful pop ups because he stole too many bases? Is he REALLY from Canada at this point? I can’t really trust much anymore after that performance. Thankfully, he put that behind him and regained form the next season with a total of ZERO pop ups.

Votto is considered a power hitter. Power hitters are usually popping the ball up more often due to them attempting to go yack sauce most of the time because they are capable. So scary. Also, shout out to Ryan M. Spaeder on Twitter for this other crazy Votto stat: 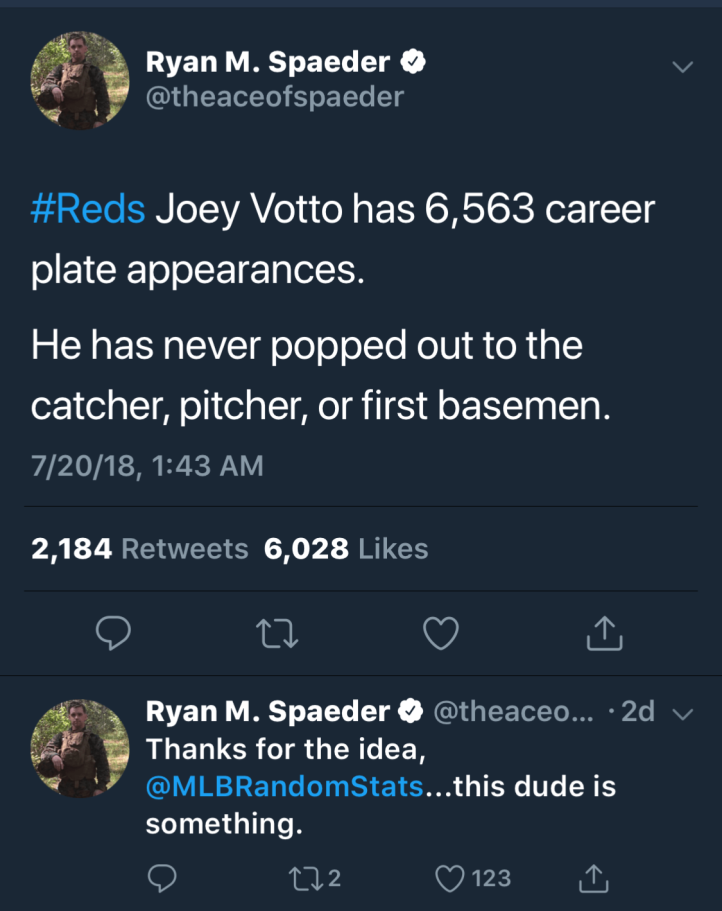 These are the types of stats that if you didn’t have proof, there is no way you could believe this. I know these two stats about Votto are probably the craziest stats I have almost ever come across. If you watch Votto hit, he chokes up on the bat far more than a lot of power hitters ever have done. For those of you that had the privilege to watch one of the best baseball players of all time, Barry Bonds, Bonds used to choke up on the bat more than I have ever seen. More than David Eckstein used to do. So even though it is one of the craziest stats I have ever come across, there is some truth to it because he squares more balls up than most people in the league.

You have to love these little stats for some of us baseball nerds but even if you’re not a baseball nerd, you will understand to appreciate how unbelievable this stat is. I can guarantee that this is the type of stat that we will not be seeing much of from anyone, let alone from one of the best hitters in the league, for many years to come.

There was an error retrieving images from Instagram. An attempt will be remade in a few minutes.