Who Did the Dodgers Get for Machado?

Expceptable, but crazy. It feels like the Dodgers sign and trade for everyone ever since Magic Johnson and his squad took over.

So who exactly did they get you ask? The centerpiece of the deal was Yusniel Diaz, who we will get to know a little more in a a second. Also, a few players you probably have not heard of, including; right-hander Dean Kremer, third baseman Rylan Bannon, righty Zach Pop and third baseman Breyvic Valera.

Yes. You saw that correctly, the Orioles ended up trading Machado for a total of FIVE prospects. The most notable prospect being outfielder Yusniel Diaz. Signed from Cuba back in November of 2015 for $15.5 million, the Dodgers got an 18 year old ready to dominate. Coming on the scene at the age of 14, thanks to Baseball America writer Ben Badler, Diaz got recognition playing for Cuba’s 16 and under league batting .367/.519/.517 as a 14 year old. Praised for his athleticism and speed, be obviously was a good enough hitter to get the recognition be deserved too. Still at age 21, Diaz stands at a frame of 6’1 195 pounds. He should stay in center field as of now but I’m sure he is alright to move to the corner spots if needed. Playing in the Arizona Fall League at the age of 20, He had a triple slash of .303/.356/.409, playing as one of the youngest guys in the league. In my opinion, from what I have seen from him and from what I have read about Diaz, he projects as a everyday regular with a chance to do 20-20 regularly when he fills out his frame more but we will never know what he will do to his body and or what nature has in store for him.

Diaz is definitely the more well known prospect out of the bunch but they all are unique in their skill set and futures. Let’s take a look at the rest of the bunch.

Dean Kremer-  Kremer’s stats do not exactly jump out at you from last year- 5.18 ERA in 80 innings- but the man struck out 96 in 80 innings so there is some upside with his funky mechanics. This year however, Kremer is pitching to a tune of 3.03 ERA pitching for both High-A and for Double-A, starting 17 games so far with a strike out rate looking even better than last year with striking out 125 over 86 innings. If he keeps up this trend, we should see Kremer maybe break the rotation next year in 2019 or break with the team out of spring training in 2020. Side note- He was the first Israeli to sign with an MLB team after being drafted in 2016 in the 14th round by the Dodgers. Pretty cool.

Rylan Bannon- Drafted in the 8th round of the 2017 draft, Bannon has held his own in the pro ball circuit. In his two seasons of pro ball, one being in the rookie league after he was drafted and the other being in High-A this year, he has held his own pretty nicely. Bannon tore up rookie ball with a triple slash of .336/.425/.591 while adding 10 bombs and five steals. Although he did make six errors resulting in a weak .939 fielding percentage at third base, he made up for that in his second season at High-A in 2018. With a triple slash of .296/.402/.559 while producing 20 bombs, 60 RBI’s, 17 doubles and 6 triples, it’s clear Bannon has a advanced hit tool. With a high leg kick and a lot of movement in his swing, there is a chance the more advanced pitching could catch up to him, but, with growing there sometimes comes pains and I’m sure he will make adjustments when needed. He also was moved around to 2nd base with the High-A team and showed well making only 2 errors in 182 innings. Keep an eye on him as he won’t make it to the show anytime soon, but there is a chance he gets moved up to Double-A either later this year or at the start of the 2019 season. 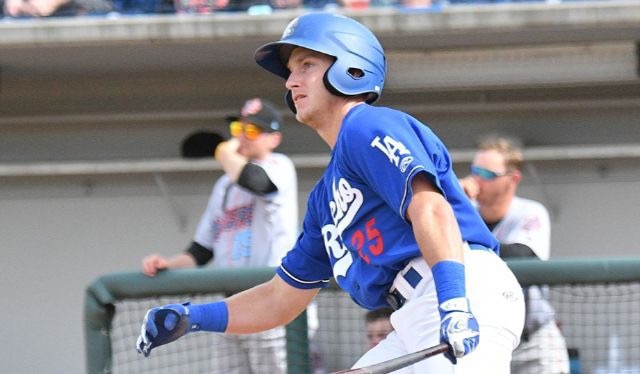 Zach Pop- Pop was drafted in the 7th round of the 2017 MLB draft and has showed really well in pro ball. Same with Bannon, he was also in High-A ball when he got traded. through 27 innings, he has a .33 ERA while striking out 23 in 27 innings. Pop has a fastball with some sink to it but can reach the mid 90’s consistently and in short work he can sometimes bring it up to the high 90’s. It almost looks like he’s slinging the ball with a three quarter arm slot, but people criticized Jake Arietta all these years until the Cubs gave him a chance to throw what was comfortable for him and it seems to have worked out. Pop could advance a little quicker than Bannon because he is a late inning power arm, but he will most likely start the 2019 season in Double-A.

Breyvic Valera- Once a top prospect for the St.Louis Cardinals as early as 2016, Valera was given his chance to establish himself in a utility role and has not performed as expected. He has always hit a decent average in the minors, but with almost non existent power. Still young at the age of  25, he still has a chance to carve out a utility role in the bigs, just do not look for him to be a main contributor for years to come. He was more of a throw in for this trade.

Since Machado went to the Dodgers, there is a chance that he is not a rental piece. One of the biggest questions about this trade was if he was going to a team that could/would resign him, or was he going to be a 3-4 month rental for the playoffs. The dodgers have the money to sign him long term, or whatever they can agree on. Chris Taylor was their starting shortstop but now they are able to utilize his versatility to it’s max potential as Taylor can play all positions on the diamond so I would not expect him to lose his job to Machado.

With all these players being relatively unknown except maybe Valera, who you would really only know if you are a baseball fanatic, keep an eye out for their name in the news or even in some minor league all star games next year and beyond. This trade could be the starting piece the Orioles need to get the wheels back on the track, or it could be just a useless trade that they wish they would have looked somewhere else for. Only time will tell.