As soon as humans began settling into villages, towns, and cities beer became essential to the equation. With growing populations living in shrinking swaths of land, people had to learn to tolerate each other more than ever. Beer helped.

That is the thing about beer. You don’t need something to watch, to do, or to discuss — just a beer and someone to talk to. To me, that’s magical.

Fort Myers Brewing Co. recently celebrated it’s 5th anniversary and that is exactly what we did. A group of friends from my CrossFit box created a circle of chairs on the outer rim of a massive crowd, drank our beers, talked, and laughed. 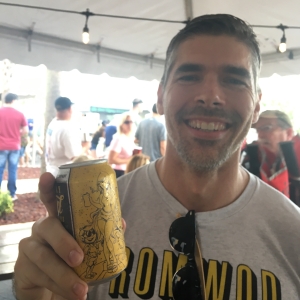 Among those friends was Mark Gilchrist, the artist behind not only our Crafthouse Cinema logo, but the can of one of Fort Myers Brewing Co,’s most popular beers, the Gateway Gold American blonde ale.